The Real Life Actor is the new book by Jeff Seymour, a Gemini-award winning actor, coach, and writer with a history of appearances and projects ranging from Knots Landing and Bosom Buddies all the way to Being Erica and Jeff Ltd. A Vancouverite for over a decade, Jeff Seymour is now an acting teacher based in Burbank, California.

In the middle of his busy international book tour, Jeff Seymour spoke with us about The Real Life Actor, his history in the entertainment business, and his advice for new actors.

Can you start by telling us a bit more about you and the projects that you are involved with at the moment?

Currently I’m on a book / seminar tour. I was at Second City in Chicago on June 16th. I’ll be at The Triad Theatre in NYC on June 30th. Then I’m off to the UK, Austria and France. I’m looking forward to seeing how they respond to my book and approach across the pond.

How did you first become interested in acting and what steps did you take to get there?

I was a latch key kid so I was always alone in front of a TV.  I loved television. I’m sure it was something I always wanted but I didn’t say it out loud till I was 18 years old. I left Virginia, where I grew up and headed to a theatre school in L.A.

Who were your greatest influences when you were starting out?

Believe it or not, Al Pacino and Dick Van Dyke.

What have been some of the most memorable moments in your career thus far?

Running my own theatre for 10 years in LA. Working on The Eleventh Hour in Canada. Creating my own TV series, JeffLtd and getting to do whatever I wanted for 2 seasons. Winning a Gemini and receiving multiple nominations is always lovely. Going to Morocco to shoot an episode of Homeland and work opposite Claire Danes. Doing Speed the Plow by David Mamet in a small theatre in LA and having Quentin Tarantino show up. 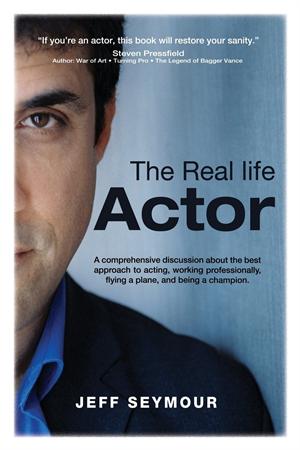 Let’s talk about your book, “The Real Life Actor”. What inspired you to write this?

35 years of teaching and in that time developing an approach to acting that I feel is as unique as it is highly effective. It was something I wanted to do after 15 years of teaching. It took me another 20 years before I finally got around to doing it. When I finished the last words of the final chapter and knew that my 20 quest was complete, I started blubbering like a baby. I was so relieved I had finally finished it.

What can actors expect to gain from reading the book?

Hopefully the clearest explanation of what great acting is and the most straightforward, effective way to attain it. It also outlines and shares the winning professional attitude needed to persevere and succeed in the business. The book is also meant to inspire.

From your standpoint, is it easier or more difficult for new actors to “break out” in the industry today than it used to be?

It’s probably a wash. Whereas it might be harder to get to agents and be seen because of the overwhelming amount of actors vying for a chance, there is now electronic media. Nowadays with a good idea and some initiative, actors can leap frog ahead and make some serious noise on their own.

Overall, what is the most rewarding aspect of your work?

All of it. Any of it. In the thirty six years since my first professional job, I’ve never had to make a living doing anything else.  It never feels like work. Like the saying goes, “Find something you love doing and you’ll never work a day in your life.”

As an actor, you’ve had a number of roles on television and film. Do you prefer one over the other and how does your creative process change if it’s a film or television role?

The only difference I see between the two is that they take a little more time when they make a film. My process is the same, I just have more time in between takes.

What advice would you give to someone who wants to pursue a career in acting?

Take the time to acquire ability before you market yourself. Agents and casting directors have long memories. A bad first impression may be the only impression you are ever afforded. Make it count.

What books have been influential in your creative journey so far?

The War of Art by Steven Pressfield. I can not recommend his book enough. It is life changing!

Where can people find out more about you and keep up with your latest projects?

Our thanks to Jeff Seymour for speaking with us! You can check out his book right here!