In Canadian artistic circles, Rebecca Coleman is well-known and respected for her achievements and expertise in the areas of social media and publicity.

With social media being a continually relevant and evolving necessity for entertainment professionals, we wanted to tap into Rebecca Coleman’s well-versed industry knowledge to gain a clearer understanding of how the social media machine works.

Can you start by telling us a little bit about you and what you’re up to these days?

I am an instructor at BCIT, I teach 4 courses there (social media and blogging), and I am also teaching acting students at Douglas College and School Creative (Vancouver Acting Studio) PR and Social Media Skills. I am a consultant; working with businesses to help them to market themselves via social media. I am a blogger, I currently run 3 blogs and write for a few others, as well.

Why is social media important for people in the film, television, and theatre industry?

There was a time, when, to be an actor or a writer or a director, there was a prescribed path: go to school, get your degree. Get an agent. Get out there, hopefully land small roles, leading to larger roles, and eventually, stardom. Much of your career was placed in the hands of someone else. Those days are gone. Today, through social media, you can create your own marketing, create your own career. Having a following in social media will make a difference when you go to audition. 9 times out of 10, the casting directors are going to choose someone with a bigger twitter following, all other things being equal. You can help them market the production–that is leverage.  Social media is allowing artists, in a way, to choose their own adventure, carve out their own careers.

What are the three things that every blog post needs to be effective?

Voice and story. A unique voice or point of view is incredibly important, and being able to tell a story that draws people in.

A compelling image. Our brains process images way faster than they can process words. Plus, a screen full of words is a bit of a turn-off–it’s important to break up the text with graphic or images, which help to draw the reader in. Thirdly, with the rising of new image-based social media like Pinterest, having an image in your blog post helps to market it, and gets it found in searches easier.

Keywords. Okay, gonna get a bit technical. From a marketing standpoint, if you want your blog to be found, you need to think backwards. For this particular post, what are the keyword strings people would put into Google that would make them end up on your blog post? Integrate those into your tags and also into the body of your blog post–but do it in a way that flows. People can tell when you’re faking for SEO.

Facebook, because it’s the biggest. With nearly 1.5 Billion accounts worldwide, FB is still the first thing people look into every morning when they wake up. The algorithm, however, makes it tricky.  Twitter is an amazing tool for artists to find others like them, and forge connections with other artists all over the world. I love it for that. I adore Instagram, personally, because I love the pretty pictures. Instagram is a great tool for artists to show what I call “a slice of life:” going to auditions, the gym, costume fittings, backstage on opening night. What’s your story? You can show it through Instagram. LinkedIn is important for connecting with agents and casting directors, or finding job-jobs. YouTube is very visual, so for such a visual medium as ours is, video is incredibly important.

In your opinion, should actors learn social media from a professional and then handle it themselves or are they better off with someone who can manage and create their social media content with their approval?

It really depends on how busy you are, and what your finances can handle, but I recommend you learn enough about it so that you know what’s good practices and what’s not. It’s very easy to get fleeced by unscrupulous individuals. You should treat social media the same way you treat your finances; sure, hire an accountant, but know enough about bookkeeping and taxes to know if you are being ripped off.

Having said all of that, I think the best path is to handle your own. It’s more authentic. But I would get some training and advice first, and if your following gets out of control and you need to hire someone, that’s cool, too.

As someone who has a long and successful association with the arts, what books would you recommend to people who want to pursue a career in the arts?

Some books that really inspired and focused me include:

True and False by David Mamet

The War of Art: Break Through the Blocks and Win Your Inner Creative Battles by Steven Pressfield

The Artist’s Way by Julia Cameron

And if I may do a shameless plug for my own book: 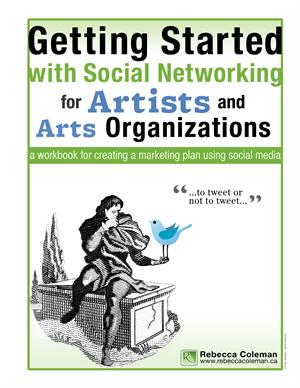 Getting Started With Social Media for Artists and Arts Organizations

What is it that got you interested in the social media side of things to begin with?

Almost 8 years ago, i went through a big career change. I’d been doing freelance arts publicity, mostly as a hobby (on the side), for a few years, and then I lost my job-job. I wondered, “could I make a living doing this full time? Self-employed?” I was a newly single parent, and needed work that allowed me a flexible schedule so I could still drop off and pick up my son from school every day. So, I launched my business in December of 2007. I started writing a blog as a means to market my new business, and quickly fell into Facebook and Twitter soon after. I started to wonder, “could I make this work for my clients?” and began experimenting with it. I quickly became the go-to gal in Vancouver if you wanted to use social media to market your theatre production.

Why did you choose the arts as your area of focus?

Because I couldn’t possibly choose anything else. I’ve only ever wanted to be in the arts. It is my heart. When I was 18, I went to university, and discovered the theatre, and it was a complete revelation to me. I had always been a writer, but in the theatre I found the people that were like me. I found my tribe. And that was incredibly powerful. I’d never want to work anywhere else. It would feel too much like work.

You have a long history in publicity as well. What are some of your project highlights and memorable moments in that area?

I have worked with some amazing artists–including the incredible Robert Shields and Robert Lepage. I interviewed David French, one of my writing heroes, and more recently, Alan Doyle.

I have worked with almost all the independent theatre companies in Vancouver; The Electric Company, Shameless Hussies, Touchstone. A few standout projects include The Beast of Bottomless Lake, a film I was part of, and very proud of, about the Ogopogo. I also really love doing site-specific stuff, like some of the show Itsazoo does–in parks and parking lots, and this really cool production called Metamorphoses, which takes place in a swimming pool. Oh–and a production of Five Women Wearing the Same Dress I produced and also acted in.

Where can people find out more about you and what you’re up to?

Our thanks to Rebecca Coleman for speaking with us!

The War of Art
Steven Pressfield